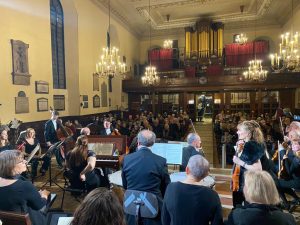 with the All Saints Orchestra

Tickets £25 available at the www.actorschurch.org

The Actors’ Church is delighted to welcome All Saints Chorus to perform Bach’s Christmas Oratorio in aid of The Lennox Children Cancer Charity.

St Paul’s Church is a church located in Bedford Street, Covent Garden, London, WC2E 9ED. It was designed by Inigo Jones as part of a commission for the 4th Earl of Bedford in 1631 to create “houses and buildings fit for the habitations of Gentlemen and men of ability”. As well as being the parish church of Covent Garden, the church has gained the nickname of “the actors’ church” by a long association with the theatre community.Completed in 1633, St Paul’s was the first entirely new church to be built in London since the Reformation. Its design and the layout of the square have been attributed to Inigo Jones since the 17th century, although firm documentary evidence is lacking. According to an often repeated story, recorded by Horace Walpole, Lord Bedford asked Jones to design a simple church “not much better than a barn”, to which the architect replied “Then you shall have the handsomest barn in England”.The building is described by Sir John Summerson as “a study in the strictly Vitruvian Tuscan Order” and “almost an archaeological exercise”. The description of a Tuscan or Etruscan-style temple in Vitruvius, which Jones closely follows in this building, reflects the early forms of Roman temple, which essentially continued Etruscan architecture, though quite what Vitruvius intended by his account has divided modern scholars. It has been seen as a work of deliberate primitivism: the Tuscan order is associated by Palladio with agricultural buildings. 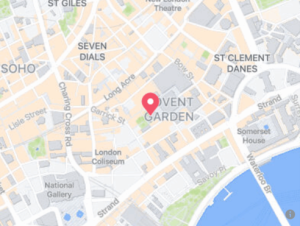 —
Please note that we are still operating some limited COVID measures in the church such as masks indoors and hand sanitiser in use.
We have no public toilets on-site, please use the public facilities just outside the church on the Covent Garden Piazza.
Bach Oratorio

We are a friendly community choir. There are no auditions and no prior musical experience is required. Anyone who wants to sing is heartily welcome.
We meet on Tuesdays during term time from 7.45pm until 9.30pm at West Ham Parish Church, E15 3HU. Contact us on 07933 983652 or enquiries@allsaintschorus.org for further information.

We are excited to announce the launch of our Friends scheme in September 2016. Your annual subscription will support the work of the Chorus, and in return you will receive reserved seats with advance booking, your name in our concert programmes, regular updates on ASC events and invitations to our social activities. More...